Interbeing.Interbeing is a word that, I’ve been told was coined by Thich Nhat Than, the vietnamese monk. And it’s a little stronger than Interdependency or Interconnection, which might mean separate beings having connections or depending on each other, but Interbeing means it’s kind of like interexistence. It means, not only for me to survive do I need you and you and you or other beings, but in order to even exist.

I guess everybody has a story about who they are and how the world works. And usually this story is invisible to us because we are swimming in it, it emerges us. It’s part of our whole way of seeing. So. And everybody has their own individual story but also a culture has stories that are shared to some extend but almost everybody in the culture.

And we just take these as granted as reality itself. It seems like it’s not a story, it’ just real. So, in our culture – in my culture – something might be the idea that there is a reality out there, outside of ourselves. Where something either is or isn’t. So in order to be secure you have to find out what that is. You have to find out what the facts are and that can be very useful if you do something like science, but it’s not always as useful. 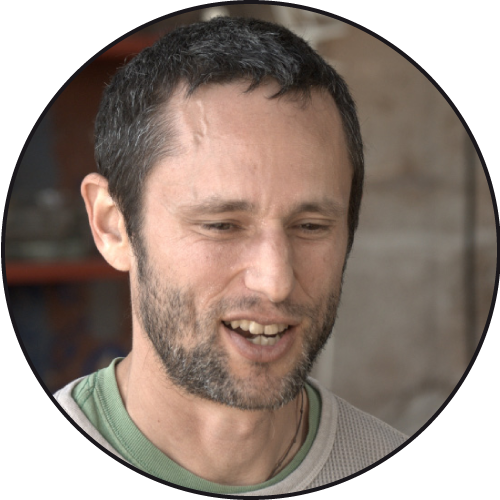 For example, let’s say you are in a relationship, and your mind is doubting: is she really loves me or not? There is a fact out there that I’ve got to make sure. So I’ve got to test it. And we find that the process of testing it might change the reality. So coming out with a situation with paranoia, with doubt or fear might create the conditions that justify the fear. Whereas when we approach somebody with the spirit of love or none-judgment or generosity, than I just know that deep down you are a beautiful person and that you want to connect, or that you want to be generous or you want to be kind.

That creates kind of an imitation for you to be that. And who exactly knows how imitation happens, that might be something energetic, maybe just some kind of subliminal signaling. But everybody is experiencing this. You know, somebody… especially with fear… Ok, so I say, when someone approaches you with fear, than you might act in a way that is scary. Especially when you are in a dangerous neighborhood or something. Or in a tense situation.

And at some point, you know, if we play out that story, if we treat them like that, then eventually they have no choice but to be hostile. So the story creates, it’s a self-fulfilling prophecy. And ultimately, there is never a way to be absolutely sure that your story is true. Like, you can never … and that’s behind all of this, all of these this is happening bla bla…… politics … so in the end she sleeps with someone else anyway. In fact it’s because of all his measures.

And the same thing when we acting from fear, we are creating a world of fear. And actually the fear is written on our world view on a deep level. Because if we accept that the world outside of ourselves is full of these random forces of nature that that have no intelligence and no purpose, then our security comes to controlling these. We have to be afraid. And when we believe the nature of life is competition, that biology programs us to be ruffles competitors and take advantage of each other, that we live in a world of hostile opportunistic beings, then fear is natural. It’s like our natural state. And biology and history in some extend take that for granted, that evolution that progress is response to fear. It’s an attempt to make ourselves more secure. To more easily survive and reproduce and spread over the earth and all species are trying to do that and we are finally the winners. Like that whole narrative is coming under question and it seems very abstract but it also has it’s emitted to a more political and personal dramas as well.

Don’t know… I’m not an expert. I think to be successful it has to have a mission beyond just we gonna get together and get community. It has to be a larger purpose. Because real community requires interdependency, it requires that you need each other. If you really need each other than you can’t just leave or kick somebody out likely. Because you need them. A traditional village was like them. You know you needed the blacksmith. You had to get along with the blacksmith somehow. You couldn’t do something to terrible to other people in the community otherwise you would suffer too.

So today, one of the difficulties in creating communities, at some level people know at least for their survival, they don’t need each other. You know I could leave the community if you live let’s say ZEGG community. I could just go to Berlin and get a job there. You don’t need these people. But if you are all committed to a common purpose than you do need each other. Maybe not for your survival, but you need each other like a band needs the bassplayer, a band needs the guitars. Without the guitarist you not gonna play music. So you need that person. In the same way, if community has a common purpose, than everybody is needed, or everybody’s gifts are needed.

And I can look at you and I say I need you. Because without you, this thing I really care about would not thrive, it would not be successful. So that, when you have that mutual need, then when conflicts come up, you gotta find a way to resolve them. You can’t just OH! I’m leaving. You know or get out. Because need that person so you have to resolve conflicts and that creates a culture of conflict resolution so that the community doesn’t just break appart when the first distress shows up.

To sum up what I just said: For a community to be successful I think you have to have more than just the impulse, the desire to have community, you have to have a common purpose. Because when we joined in a common purpose, then we need each other. Not for our survival necessary, but we need each other to fulfil this purpose that we all care about. When conflict arises, you can’t just wlk ot or kick the person out because you need them and they need you. So you got to figure out a way to resolve the conflict. And over time this culture of conflict resolution, this culture of neutral care and finding a way making it work for you. That becomes ingrained, becomes part of the culture and allows the community to survive.

I think a crisis is necessary and inevitable, more then one crisis. That is how big changes happen. It happened in my life. I know many, many people describing their process of transformation, and I think it’s true on a collective level too. It’s inevitable, like most believe is that infinite growth can happen on a finite planet. We are heading for crisis, because our system only works in the context of growth, but we are obviously reaching limits to growth. For some foremost ecological limits. So that means our economic system doesn’t work very well anymore and that is gonna create crisis. But it’s not just economic of course. All of our defining institutions are in a state of crisis or approaching crisis. And I mean just take the institution of

marriage for example. The story of how to live a life that included marriage was very strong to generations ago. Divorce was unheard of. You know, you dated people. You tried to find the one to spend the rest of your life with. Then you talk over to your parents and your friends, you know how recompetible, is this gonna be a happy marriage.

And if you decide so and the wiser, older people decide yes this is gonna be a happy marriage and give you your blessings, then you get married, you have children and grandchildren and you gonna stay together your whole life in a two person unit. And you know that was unquestionable. Today people still in general except that as a norm, as the right way to do it.

But if you look at the divorce rate it’s obvious that it’s not working. So, does that mean we degenerated? And we just don’t have the moral fiber to make it work anymore? Or does that mean that story is changing and maybe we need to explore some other kind of cultural agreement, cultural story of how to live a life. And I don’t know what that is.

Some of these communities like ZEGG, Tamera, all of the other communities are exploring what that might look like. I don’t think any of them have the answer, but I think the exploration is valuable. And who knows, maybe we eventually come back to some kind of contained sacred partnership. I don’t know. We are in the space between stories now![…]